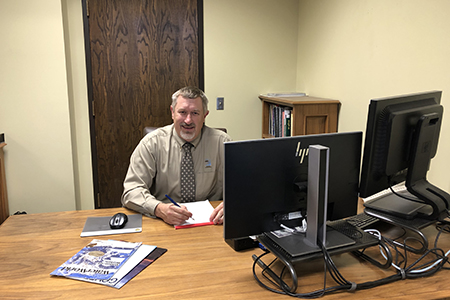 Todd D. Adams has been appointed to head the Utah Division of Water Resources. Department of Natural Resources Executive Director Brian Steed selected Adams to replace Eric Millis who retired after nearly 32 years with the division, six of those as the director.

“Todd has a wealth of experience that will serve our state well as we look to manage this critical resource,” said Steed. “He is well respected in the water industry, and he will continue to look for ways to stretch and best manage our water supply.”

Throughout his career, Adams worked on various projects that support the division’s mission to “plan, conserve, develop and protect Utah’s water resources” including water demand and supply modeling for the Wasatch Front, the State of Utah as well as individual river models.

“We would run ‘what-if’ scenarios to look at what water could be used and how those potential scenarios would affect the river system,” said Adams.

Adams also managed the hydrology and computer application section from 2000 to 2006 where they built computer programs to automate processes. Not only were the calculations more repeatable and accurate, but they also resulted in significant time savings.

“At the beginning of my career, it would take a team of engineers days crunching numbers with cookbook processes, maps, spreadsheets and rules of thumb, and sometimes you’d get different interpretations you would have to reconcile,” said Adams. “Now, the computer performs those calculations in seconds.”

When Adams started with the division, Utah’s population was about 1.73 million. Fast-forward 29 years and Utah has added almost 1.4 million people, pushing the population to over 3 million. The growth is expected to continue, making water conservation increasingly important to the division’s mission.

“The secret is out. Utah is a great place to live,” said Adams. “People want to stay here. And they’re also moving here, and they don’t bring water with them. We are working to balance those needs with increased conservation efforts, improved efficiency, water development projects, ag conversion and more. We have to have a multi-faceted approach.”

The division will also continue working with state officials to respond to Utah’s water needs. Adams isn’t a new face at the State’s Capitol. In 2009, he started serving as the division’s legislative liaison. Over the years, Adams has helped legislators shape many bills including canal safety, water conservation, secondary metering and more.

“I’m a believer in our division’s mission to ‘plan, conserve, develop and protect Utah’s water resources,’” said Adams. “We will take a look at what we’re doing and look for ways to do it better and make sure it’s in harmony with our mission. We have great staff, and I’ve been fortunate to have been mentored by our outgoing director who left things running very smoothly.”

SALT LAKE CITY (Sept. 29, 2021) – The Utah Division of Water Resources is seeking public input on the new Water Resources Plan. This plan is the result of years of data gathering, modeling and other collaborative efforts to identify when and where water will be needed throughout the state. The comment period runs Sept. …

END_OF_DOCUMENT_TOKEN_TO_BE_REPLACED

SALT LAKE CITY (Sept. 20, 2021) – The Utah Division of Water Resources will convert four grassy park strips to lush but water-wise landscapes to launch “Flip Blitz,” a campaign that aims to raise awareness about how small landscape changes can make a big difference. The campaign kicks off Tuesday, Sept. 21 at 13218 S …